ANS -- How do we know humans are causing global warming?

This is part of an article on climate change.  Go to the page for the big long time line of climate change in cartoon form.  It's fun.  It's called

"Yes, the climate has always changed. This comic shows why that's no comfort. "

How do we know humans are causing global warming?

Climate scientists say they are 95 percent certain that human influence has been the dominant cause of global warming since 1950. They're about as sure of this as they are that cigarette smoke causes cancer.

1) Scientists have long known that greenhouse gases in the atmosphere — such as carbon dioxide, methane, or water vapor — absorb certain frequencies of infrared radiation and scatter them back toward the Earth. These gases essentially prevent heat from escaping too quickly back into space, trapping that radiation at the surface and keeping the planet warm.

2) Climate scientists also know that concentrations of greenhouse gases in the atmosphere have grown significantly since the Industrial Revolution. Carbon dioxide has risen 40 percent. Methane has risen 150 percent. Through some relatively straightforward chemistry, scientists can trace these increases to human activities like burning oil, gas, and coal.

3) So it stands to reason that more greenhouse gases would lead to more heat. And indeed, satellite measurements have shown that less infrared radiation is escaping out into space over time and instead returning to the Earth's surface. That's strong evidence that the greenhouse effect is increasing.

4) There are other human fingerprints that suggest increased greenhouse gases are warming the planet. For instance, back in the 1960s, simple climate models predicted that global warming caused by more carbon dioxide would lead to cooling in the upper atmosphere (because the heat is getting trapped at the surface). Later satellite measurements confirmed exactly that. Here are a few other similarpredictions that have also been confirmed. 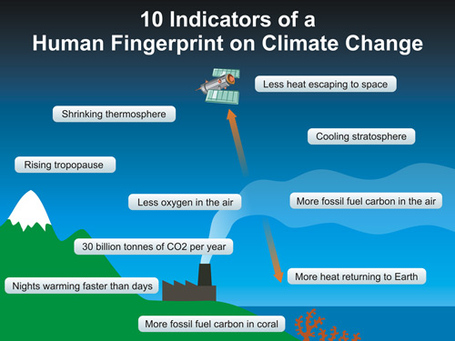 5) Meanwhile, climate scientists have ruled out other explanations for the rise in average temperatures over the past century. To take one example: solar activity can shift from year to year, affecting the Earth's climate. But satellite data shows that total solar irradiance has declined slightlyin the past 35 years, even as the Earth has warmed.

6) More recent calculations have shown that it's impossible to explain the temperature rise we've seen in the past century without taking the increase in carbon dioxide and other greenhouse gases into account. Natural causes, like the sun or volcanoes, have an influence, but they're not sufficient by themselves.

Ultimately, the Intergovernmental Panel on Climate Change (IPCC) concluded that most of the warming since 1951 has been due to human activities. The Earth's climate can certainly fluctuate from year to year due to natural forces (including oscillations in the Pacific Ocean, such as El Niño). But greenhouse gases are driving the larger upward trend in temperatures.

More: Here's a chart breaking down all the different factors affecting the Earth's average temperature. And there's much more detail in the IPCC's report, particularly here and here.