This is from Doug Muder.  It's about our declining civilization.  What will rise from the ashes? Here is what Sara Robinson said about this article:

"There goes Doug Muder, making me think again. This time, it's about the arc of civilizations. Basically: you are either building, dreaming, and investing in an increasingly rich and complex future; or you are in decline -- living off your past investments, refusing to make new ones, and letting entropy have its way with you.

There's very little question at this point which path the US is on. We'll do a half-assed job of rebuilding Houston, just like we did a half-assed job in New Orleans. We will learn nothing from this, we will not invest in rising from the muck, and will will not make the investments required to make it Better Than Ever.

And those truths are the baldest possible statement that our time has passed."

Houston will be rebuilt to withstand challenges of the past, not the future, because that's what declining civilizations do.

Every few years some event makes me come back  to The Long Descent, John Michael Greer's book about the end of civilization as we know it. This time, it was Hurricane Harvey and the destruction in Houston. 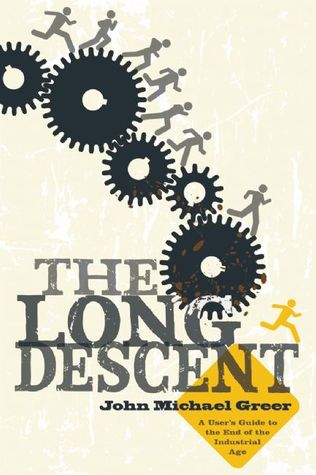 The Long Descent came out in 2008, and I reviewed it for the Sift in 2010 (long enough ago that I'll assume you either hadn't discovered the Sift yet or lack encyclopedic recall of everything that's been in it since). TLD is both depressing and reassuring: depressing because Greer thinks our civilization is already on the way down, and reassuring because he believes that a civilization-wide decline takes a very long time to play out. (The peak of the Roman Empire was in the 2nd century, but the last Caesar didn't fall until the Ottomans captured Constantinople in 1453. As Adam Smith is supposed to have remarked in 1778, when told that Burgoyne's surrender at Saratoga marked the ruin of England: "There is a great deal of ruin in a nation.") So Greer doesn't predict a Mad Max future for our children, just an era of greater difficulty and more constraint, followed by an era of even more difficulty and constraint for their children.

But during the descent, Destruction has the upper hand: A certain amount of rebuilding happens after each disaster, and sometimes it even briefly looks like things have turned up again, but you never quite get back to the previous peak before the next disaster sends you reeling. A constant shortfall of constructive energy means that maintenance is always getting deferred, which invites the next disaster sooner than it would otherwise show up.

New Orleans, for example, had about 450K people before Katrina. It shrunk by about half immediately afterward, and has "recovered" back to about 390K. Pre-Harvey Houston clocked in at 2.3 million. What does its future hold?

That's not really a fair comparison, though, because New Orleans was already shrinking before Katrina, while Houston has been growing. Houston is a still full of oil money,  so maybe its recovery will look more like London or Chicago.

However, there's one way in which New Orleans and Houston are similar: Both were disasters waiting to happen, but it was always easier to live in denial of that fact than to build the infrastructure necessary to mitigate the destruction. New Orleans' vulnerability was pointed out in 2002 (three years before Katrina) by a five-part series in The Times-Picayune:

It's only a matter of time before South Louisiana takes a direct hit from a major hurricane. Billions have been spent to protect us, but we grow more vulnerable every day.

Houston's precarious situation was described last year by Pro Publica and The Texas Tribune in their "Boomtown, Flood Town" series.

Houston is the fourth-largest city in the country. It's home to the nation's largest refining and petrochemical complex, where billions of gallons of oil and dangerous chemicals are stored. And it's a sitting duck for the next big hurricane.

When New Orleans rebuilt, it only kinda-sorta dealt with the risks that Katrina had exposed. In 2015, Scientific American asked: "Is New Orleans Safer Today Than When Katrina Hit Ten Years Ago?"

It took state officials, scientists and engineers seven years to finally agree on a master recovery plan, released in 2012, and only then did work begin in earnest. The region had dodged an annual bullet because no big hurricane had returned. But several shortcomings in the plan, being discussed by experts, raise questions about whether the New Orleans area is safer now and whether it will be safer in the future.

The article's conclusion is that the center of New Orleans is now safe against the mythical "100-year storm" (an insurance standard based on pre-climate-change statistics) as long as the newly rebuilt levees and floodwalls are properly maintained. (In addition to normal deterioration, New Orleans is still sinking, so levees and floodwalls will need to be raised periodically.) But this is exactly the kind of maintenance that doesn't get done in Greer's model of declining civilizations. There's always a budget crisis, a more urgent problem, and various other reasons to defer the work until next year.

Communities outside the city center, where more people live than in New Orleans proper, are as exposed as ever. Various kinds of human activity have destroyed the vegetation in the Mississippi Delta's marshlands, so nothing slows down a storm surge. There's a restoration plan, but it is still unfunded. Maybe the resources will come from BP's settlement for the Deepwater Horizon disaster, maybe the rest of the local oil industry can be convinced or compelled to cough up money, or maybe somebody (local? state? federal?) will be willing to pay higher taxes. But the more likely scenario is that everybody will just cross their fingers and prepare to blame somebody else when the next storm hits.

At first, Sandy seemed to be the calamity that was finally big enough to rouse the country to the arrival of climate change's many risks. … But even as the inevitability of rising seas and extreme storms settled in, a chasm opened between the actions necessary and what would actually get done.

… Every 30 years FEMA tries to update flood maps which determine two things: cost of insurance and guidelines for building standards. Property owners get lower premiums if they meet or exceed FEMA's standards.

What is not commonly understood is FEMA's limitations. It is not allowed to use predictive science. It is supposed to use the present and past as guidelines, but it has not included Sandy's impact in drafting the most recent maps that the communities are using to rebuild.

Even if FEMA is required to give obsolete advice to local builders, President Obama had at least managed to include climate change in the federal government's own building plans. But President Trump just reversed that policy.

A key element of the new executive order rolls back standards set by former President Barack Obama that required the federal government to account for climate change and sea-level rise when building infrastructure.

This overregulated permitting process is a massive self-inflicted wound on our country — it's disgraceful — denying our people much-needed investments in their community.

In other words: Realistic federal regulations are too onerous; they slow down the building process and make it more expensive. Projects can be built faster and bigger and grander if we let ourselves live in a fantasy world.

Texas, where state government is also dominated by climate-change deniers, is not likely to buck this trend. So when Houston is rebuilt, it will undoubtedly be built to withstand last year's weather, but not next year's weather, and certainly not the weather of 2030. For a time, it will look fabulous. And then it won't.

Rising civilizations respond to challenges with visionary bursts of construction. At the height of the British Empire, for example, London responded to a series of cholera epidemics and the Great Stink of 1858 by building a citywide sewer system that is still in use today.

But declining civilizations are always a step behind. They congratulate themselves for how well their plans would deal with yesterday's problems, while ignoring the predictable challenges they soon will have to face.

Watching up close the forces Greer describes, I come to realize that decline is as much a psychological condition as an objective situation. A civilization on the cusp of decline may still have enough constructive energy to deal with its real challenges, if it faces them. But if instead it indulges in magical thinking, and builds for a fantasy future in which those challenges simply go away, then it will miss all its opportunities to turn things around. Its wishful thinking about its own greatness will be precisely what keeps it from ever making itself great again.