ANS -- Outlines of a Reading Project on Class

Here's another article by Doug Muder.  It's about class in America.  He ends with a  very important question.  Anyone want to attempt an answer?
find it here:  https://weeklysift.com/2018/05/28/outlines-of-a-reading-project-on-class/#comment-297459
--Kim

Outlines of a Reading Project on Class

Lately I've been reading a lot about the class divide in America — a topic that has been on my mind for several years, but has acquired a new significance in the Trump Era. Probably all this research will eventually result in a long article where I try to find some deeper insight, but in the meantime I'll just summarize what I've been reading, in case you want to read along with me.

A great place to start is "The 9.9% is the New American Aristocracy" by Matthew Stewart in The Atlantic. Wealth, as many authors have shown, is increasingly accumulating in the top tenth of a percent. But beneath that layer of plutocrats is the rest of the top 10%, which mostly consists of educated professionals with a decent amount of economic security, who have pleasant homes in safe neighborhoods with good schools, read magazines like The Atlantic, and do physical labor only to the extent they want to. (I wasn't born into this class, but that's where I am now. I suspect most — but not all — of my readers are 9.9-percenters also.)

Collectively, we control more than half of American's wealth, a percentage that has held fairly steady for decades. The gains of the top .1% mostly haven't come from us, but at the expense of the bottom 90%. Stewart says:

By any sociological or financial measure, it's good to be us. It's even better to be our kids. In our health, family life, friendship networks, and level of education, not to mention money, we are crushing the competition below. But we do have a blind spot, and it is located right in the center of the mirror: We seem to be the last to notice just how rapidly we've morphed, or what we've morphed into.

What we've morphed into is a hereditary aristocracy; it's increasingly hard for people not born into this class to join. On its surface, the system looks like a meritocracy, but we've gamed it. Winning the race requires the kind of preparation that only aristocratic kids are in a position to get. Like Jane Austen's aristocrats, we have a strong tendency to intermarry, closing off that point of entry. We also feel very little guilt about leaving the classes below us in the dust: In the Game of Life, we tell ourselves, they just didn't measure up. (Chris Hayes made a similar point several years ago in The Twilight of the Elites.) 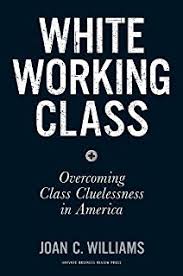 The middle-working class — let's leave the boundaries of that vague for now — consists of people who didn't make it into the aristocracy, but have what Joan Williams in her book White Working Class calls "settled lives": They aren't college educated, but they are consistently employed and have stable homes with (mostly) solid families. They typically have jobs rather than careers, and they get their identities from family and community (often a church community) rather than from their professions. (Even if you have lucrative lifelong employment as a plumber or electrician, it's what you do, not who you are.)

Members of this class take a lot of pride in the disagreeable things they've had to do to stay out of poverty — the long hours of unrewarding work, the desires they've had to suppress, the dreams they've had to defer, etc. — and they picture poor people as lacking the same moral stamina. (That's why it aggravates them when government programs let the undeserving poor enjoy some of the same rewards they take pride in earning. Liberals, they feel, are trying to erode the significance of their moral achievement.) They have different cultural values than the aristocrats and are annoyed by our belief that they tried to be us, but just failed. They don't actually want to be us, but they envy our generational stability, because (as the kinds of jobs that underwrite settled lives go away) they see no guarantees that their children won't be poor.

They also resent the hell out of us, much more than they resent the .1%. The plutocrats are like distant kings, but working-class folks have to deal with aristocrats every day. We're their bosses and the doctors who talk down to them. We're their hard-to-please clients, the consultants who come in to tell them that they're doing it all wrong, and the experts who observe and interview them in hopes of replacing them with machines. We're the talking heads on TV who use big words and insist that they'd agree with us if only they had read enough books to know what they're talking about.

Trump made it to the White House by playing on that resentment. (Historically, the 9.9% has been split between the parties or even leaned Republican. But many never-Trump conservatives are 9.9 percenters, and congressional seats in professional-class suburbs are viewed by Democrats as pick-up opportunities.) Since taking office he has done virtually nothing to help the working class — not even the white working class. But he remains popular among them because he gives voice to their resentment of the 9.9%.

Williams' point is that we aristocrats should try harder to understand and show respect to the working class, which is true as far as it goes. But The Washington Post's Paul Waldman points out a disagreeable truth: Professional-class liberals — or even just reality-based anti-Trump conservatives — are kidding themselves if they think respect is some kind of "magic key that Democrats can use to unlock the hearts of white people who vote Republican". No matter how respectful a candidate or a set of policies might be, that message will never get through the filter of "an entire industry that's devoted to convincing white people that liberal elitists look down on them."

If you doubt this, I'd encourage you to tune in to Fox News or listen to conservative talk radio for a week. When you do, you'll find that again and again you're told stories of some excess of campus political correctness, some obscure liberal professor who said something offensive, some liberal celebrity who said something crude about rednecks or some Democratic politician who displayed a lack of knowledge of a conservative cultural marker. The message is pounded home over and over: They hate you and everything you stand for.

Essentially, conservative media is like the community gossip who constantly starts conversations with "Did you hear what so-and-so just said about you?" No matter how respectful the bulk of us may eventually learn to be, somebody somewhere is always going to be dissing working-class whites, and Fox News will make sure that they hear about it.

Even when that disrespect is absent, it is easily manufactured. Waldman points out how out-of-context quotes were used to skewer Barack Obama and Hillary Clinton. Everyone knows that Clinton thinks working-class Trump voters are "deplorable", and Obama believes they are "clinging to guns and religion". 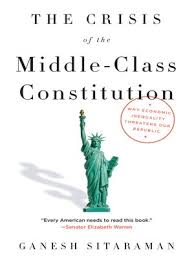 Finally, the consequences of this class divide are discussed in Ganesh Sitaraman's book The Crisis of the Middle-Class Constitution.Unlike previous republics, the United States didn't write the class struggle into its constitution: Rome, for example, balanced an aristocratic Senate against the veto-wielding Tribunes of the People. Britain separated the House of Commons from the House of Lords. America didn't do anything like that.

Instead, the Founders counted on relative equality of wealth and the presence of a large middle class to maintain a balanced society. Those are the conditions our system of government is designed for, and at various key points in American history (the homestead era, the Progressive Era, the New Deal) the government made deliberate choices that preserved the middle class and prevented either plutocratic domination or a revolution of the dispossessed.

Now we're in an era of increased concentration of wealth and power by the .1%. Now more than ever, if we're going to preserve our system of government, we need the 9.9% and the working class to band together against the domination of the super-rich. But how is that going to happen?